Penn State plays their in-state rival, Pittsburgh, for the 100th time on Saturday at 12 PM on ABC. The graphic below provides a general breakdown of the opponents, but if you want more information about Pitt, check out our preview here. Penn State comes in as the favorite, with the spread sitting at -17. Penn State covered the first two weeks, let’s see if the For The Glory team thinks they’ll cover for a third straight week and advance to 3-0. 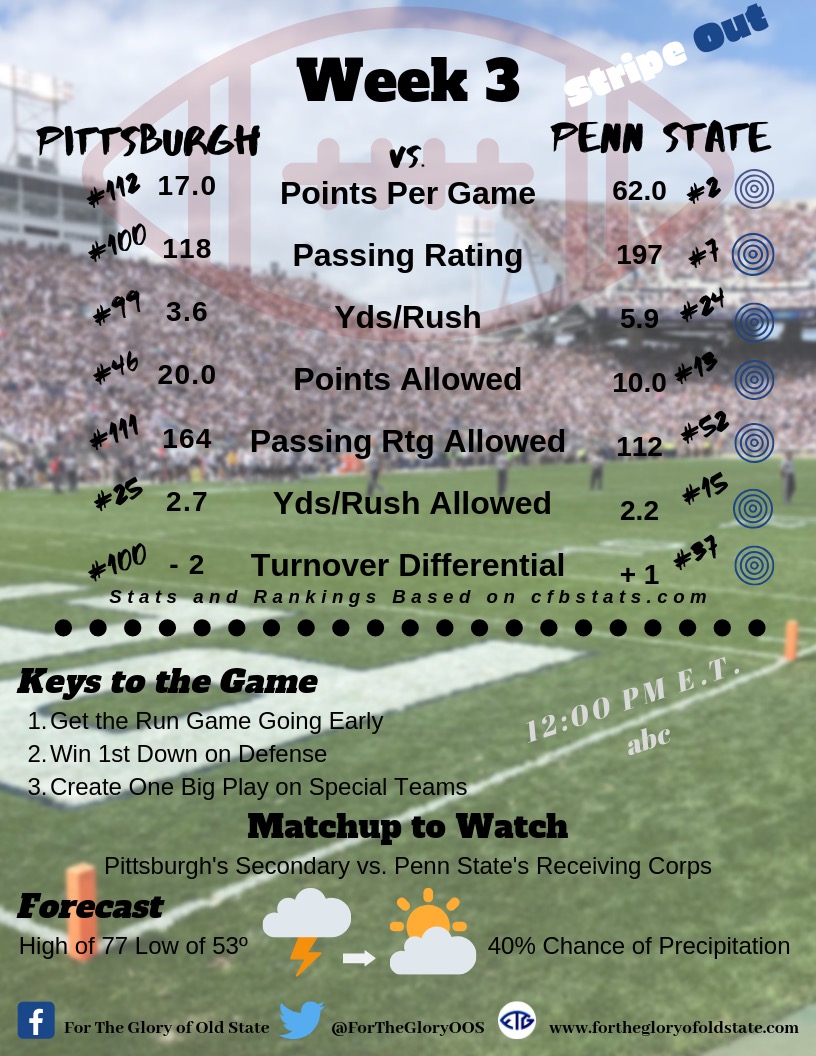 The last two match-ups between these two teams haven’t been close. Penn State has been relatively dominant over those two years. I don’t expect this year to be any different as I believe Penn State will again exhibit its dominance.

The key to the game will be the Penn State wide receivers’ ability to get open facing a relatively strong secondary in Pitt. They struggled in certain spots last week to get open. If they want to move the ball consistently, the receivers are going to have to find space.

The 2019 Stripe Out is here and Penn State will roll for a third straight year.

After I predicted a 28-point victory last week and the Lions narrowly covered with a 32-point victory on a 29.5 point spread, I am sitting at 0-2 on the young season in this category. But, I will surely take the spread into much more consideration this week as Penn State faces Pitt.

We have seen this exact type of Pitt team the last two seasons. They are inept on offense, simple as that. Kenny Pickett is not developing as the type of quarterback the Panthers are expecting and it is leading to their offense scoring only 17 points per game to start the season.

Meanwhile, I think James Franklin and Ricky Rahne open up the playbook a bit more this week. I think they were very vanilla last week with their play-calling basically because they could be against Buffalo and manage a victory. I think Sean Clifford will have a big game on Saturday, spraying it around to all of his targets all day long.

Penn State wins this one with ease and I get into the win column against the spread.

Pittsburgh is not nearly as talented as Penn State. They will try to keep the football away from the Nittany Lions, but I don’t think they will be successful since they have a -2 turnover differential.