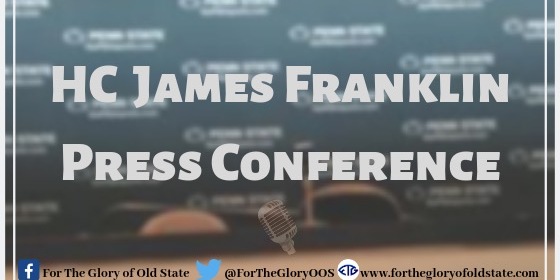 It is Tuesday afternoon, so of course that means it is time to recap some of the highlights from James Franklin’s weekly press conference. Here is what the Penn State head coach to say.

Players of the Week

“They are physical, they are tough, they are hard-nosed.” That is what Franklin described this Pat Narduzzi-coached Pittsburgh team. With offensive coordinator Mark Whipple, Penn State should expect multiple run formations and personnel groupings with a focus on the running game from Pitt. Defensively, Randy Bates is the defensive coordinator where he runs a 4-3 defense and cover four on third and long.

Cory is very strong on his stance on the transfer John Petrishen. The transfer of the former Penn State defensive back to Pitt forced James Franklin to change all of his signals, immediately. He compared it to practicing with crowd noise. It was not something Penn State implemented just this week, but a change they made as soon as the decision was made by Petrishen.

Penn State played a much better second half against Buffalo than they did in the first half, as noted here. Franklin discussed why going into the locker was so beneficial to his team last week. Distractions of the crowd and the jumbo-tron play a factor as players have a lot going on around them.

Also, getting players to give feedback of what they see on the field to the coaches is essential for adjustments. Franklin mentioned center Michal Menet as someone who excels in this category. But, with such a young team, they need to learn how to make faster on-field adjustments instead of waiting to get into the locker room to make those changes.

Journey Brown led Penn State running backs against Buffalo with just six carries. James Franklin said that all four running backs, Brown, Ricky Slade, Devyn Ford, and Noah Cain will all be in the mix yet again this week. I am sure Franklin hopes this group produces more than just 38 yards rushing against Pitt.

Franklin dived into the ideas behind football analytics, specifically on offense. There was a time where time of possession and staying on schedule on offense were preferred. But, now, many teams, including Penn State, focus on creating explosive plays, preventing such plays on defense, and winning the turnover battle.

Future of the Pitt-Penn State Series

Penn State and Pitt will meet for the 100th time on Saturday and it will be the last time for the foreseeable future. James Franklin said he always receives questions on if the series will continue. For The Glory team member Cory Lestochi certainly feels it should not. But, the Penn State head coach cited how the Big Ten schedule of nine conference games is a huge obstacle for this series. With non-conference opponents such as Virginia Tech and Auburn coming in the near future, Penn State certainly does not have the space for another Power Five conference opponent readily available.

As for his thoughts on how the series panned out since 2016, Franklin likes the results. He thinks it has been very competitive and brought out the best in both fan bases. Large crowds have come to see the first three meetings and Franklin is pleading the Penn State faithful to fill Beaver Stadium with 110,000 strong for the fourth and final meeting.

However, Franklin does not feel this series swayed recruiting as much as fans might think or hope. He points out how he brought in a great class in 2016, despite losing the game, 42-39. He just does not think one game or one victory changes recruiting one way or another in this rivalry.

Stay tuned the rest of the week for more content ahead of the Pitt match-up on Saturday.

For more from For The Glory today, click here for our PSU in the NFL weekly recap.