My Favorite Games I Ever Attended: A Prelude 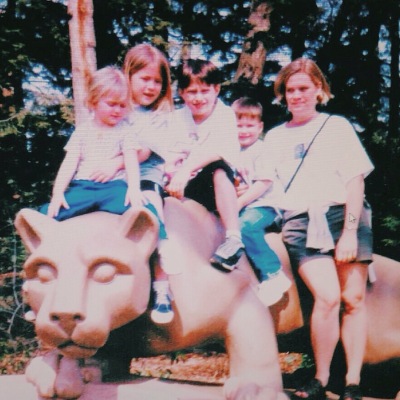 Sitting on the Nittany Lion Shrine as a five year old, second from the right.

No matter what age or how many games someone has attended, anybody who has attended a Penn State game can recall some of their favorite memories from a fall Saturday in Happy Valley. Whether it was a tailgate, or a party, or just the game itself, each and every Saturday is memorable in its own way. Our For The Glory team is proud to present you with a series that will release weekly, detailing our favorite games that we have attended as Penn State Football fans. With this series, we hope to provide some background on our fandom, to allow you, the fans, to connect with us and recall what you thought of the games we selected, and lastly, and most importantly, to allow you to dive back into your favorite moments from Penn State games you attended and share those memories with our team and the rest of the fans of our site!

For me, Kraigen Rasalla, my earliest memories of being a Penn State fan was growing up in the early 2000’s, and instead of family members playing peek a boo with me as a way to make me laugh, they would say “We Are!” And I would yell even louder “Penn State!” I didn’t even know why I was saying it but it’s like I was trained to do it. Make sure your room is clean, make your bed, and make sure you scream Penn State when someone says We Are.
As a six year old fan who watched Larry Johnson in his quest for 2,000 yards, I thought Penn State was the greatest team in college football. I distinctly remember watching Johnson run up and down the Beaver Stadium grass against Michigan State as he finally reached the historic mark and Steve Jones remarked “2K for LJ”. Then, unfortunately, Penn State struggled against Auburn in the Citrus Bowl, losing 13-9 to the Tigers, previewing a sign of struggles to come over the next two seasons.
I went to my first games at Beaver Stadium in 2003. First, I attended the Blue-White game where the highlight was seeing four Nittany Lions drafted in the first round. Jimmy Kennedy, Michael Haynes, Bryant Johnson, and Larry Johnson were all announced over the PA system as players selected in the first round of the 2003 NFL Draft. Back then, the Blue-White game and the Draft were on the same day. So, in a time before smart phones, the only way to know who was selected was by the announcement from Beaver Stadium PA announcer, Dean Devore.

In the fall of 2003, I attended my first Penn State games where they actually counted. My first game was September 20th as the Nittany Lions would take on the Kent State Golden Flashes. It seemed like a running joke in the crowd that it was hard to differentiate the sound of “Kent State” and “Penn State” over the Beaver Stadium sound system. However, the Nittany Lions won 32-10 with highly touted freshman Austin Scott rushing for three touchdowns. Then, I attended the 2003 Senior Day 52-7 victory over Indiana. 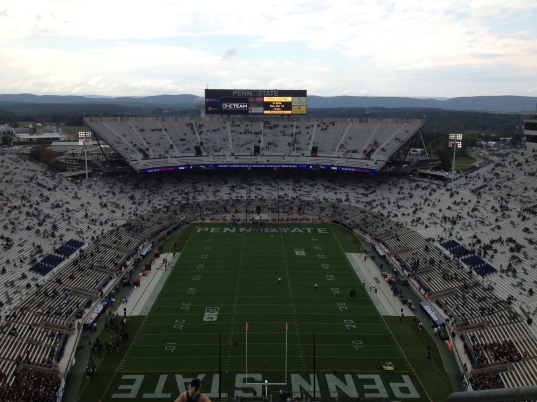 A look from my seats in the third deck in an empty Beaver Stadium prior to the Temple showdown in 2012.

My family had four season tickets that were acquired by my aunt, who worked as a pharmacist at the University. Those four tickets went to my two cousins, my grandfather, and my uncle. So, from 2004-2006, I started to attend games whenever someone in my family had work or had to stay home as they were expecting a child. Then, finally in 2007, my dad and I replaced my two cousins and joined my grandfather and my uncle on the season ticket plan. I finally became a full time guest at Beaver Stadium. My family and I were all about the Penn State game day experience. Tailgating, attending the game, tailgating a little bit after the game, and then making the two hour drive back home to Scranton, PA. This was our fall Saturday routine from 2007-2009 as the Nittany Lions compiled an impressive 19-3 record at home during that span.

Starting in 2010, I became a freshman in high school and looked to try to accomplish a personal goal of mine, which was trying to play college baseball. So, travel baseball tournaments started to consume my weekends in the fall instead of college football games. However, I always tried to make it back to Beaver Stadium at least once a year from that point forward. That included the Kent State victory in 2010, the Purdue victory in 2011, the Temple victory and Ohio State loss in 2012.

As I got into college in 2014 and decided to play college baseball at both Lackawanna College and later on at Division II Dominican College instead of attending Penn State, it became even more difficult to make it out to Happy Valley for a game. However, I was still able to attend the Ohio State and Michigan State losses in 2014,  and in 2018, the Appalachian State overtime victory and the Wisconsin victory.

As you can see, my heart has been entrenched into Penn State Football since I was 6 years old and I’ll always have that passion and love for the Nittany Lions.
This is just a prelude to a series we will start tomorrow, February 1, where we dive into some of our favorite games that we have ever attended. Our viewing experience at Beaver Stadium is not as long or as storied as many fans or alumni, but we have plenty of moments that we can share that made a few games some of our favorites. We hope you enjoy hearing our stories of our favorite games and hope it brings back some of your favorite memories of Penn State Football in the process!

tagged with My Favorite Games