I had never “cowbelled” in an empty Beaver Stadium before. Every time my drumstick hit the bell, the echoes stretched across the desolate bleachers. The hitting of the drum was only met by the Blue Band, who was still on the field from their postgame show. Maddy (@MaddyS_12), the only person who was left in the stadium with me (thanks), regretted not taking a video of it because of how special it was. I told her that I was happy there wasn’t a recording of that moment so I could always remember only through how I experienced it.

Being the President of Nittanyville is a glorious and rewarding experience. I would be lying if I told you it wasn’t nice to have people look up to and appreciate me. However, after a season of having people watching you, listening to your every word, reading every tweet, criticizing every idea you have, it was nice to have one moment in that stadium for myself.

My story in Nittanyville began four years ago when Jake Kolterjahn (@JKolterjahn) and I decided to attend a Nittanyville informational meeting. That evening we went to Walmart to buy a tent and at the store we saw these white cowboy hats. We thought, “what the hell?” bought them and thought we could wear them for a game or two. The hats became an iconic part of our friendship as we wore them in front row of the student section for every home game. I wore it for the last time this past Saturday. Thank you, Jake for being one of my best friends and being a part of that small tradition. 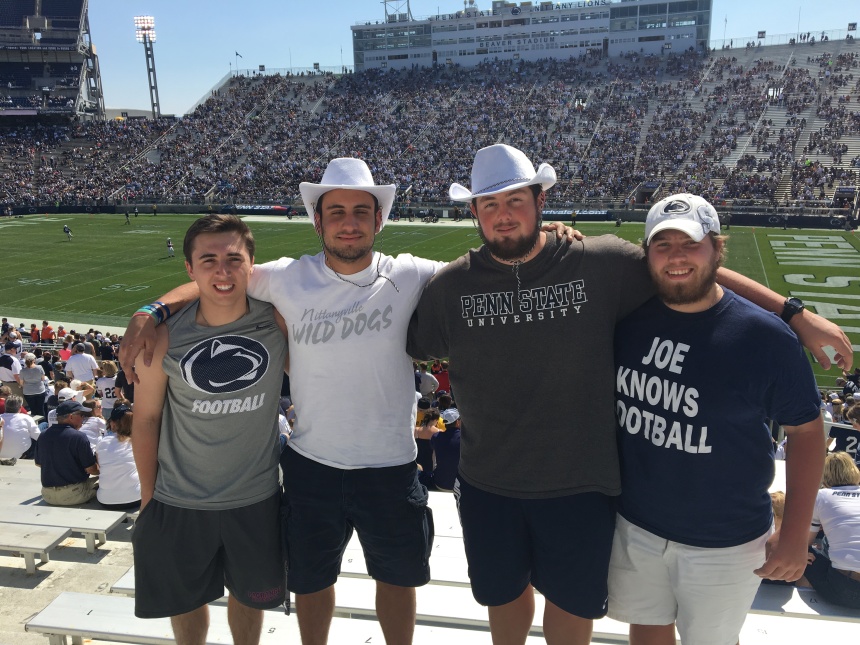 Throughout the first season at Penn State I made some of my closest friends, all of which, have been and always will be there for me when I need them. They deserve more than just recognition for all they have done for me, but that’s all they get right now:

To Anna Ungar (@wordsofanna), thank you for being outgoing and talking to me when your future-finance was being grumpy on his laptop at Gate A. Truthfully, you opened the door for me into the Nittanyville family.

To Higgins (@wordsofHIGGSdom) and Giello (@giello_shots), thank you guys for being the two coolest older brothers at Gate A. I don’t think I have ever had a bad time when I was with you. Higgins, especially want to thank you for talking football with me and being a great sounding board when I needed advice.

To Chris Keating (@ChrisKeating24), thanks for being an awesome roommate and keeping me out of too much trouble. Thanks for picking me up at Gate A on Saturday mornings at 6 AM. Also thanks for showing me Game of Thrones and Liverpool.

To Colby (@saussboss25), I have known you since freshman year of high school, but I am happy I was able to spend a considerable amount of football games with you. Thanks for always putting a smile on my face and showing me how to enjoy life.

When you first start banging on a cowbell, you think the cheer is going to go on forever, and that you have an endless amount of beats to go. Then, all of a sudden, the cheer is over. That’s how my entire time at Nittanyville went. I spent over 85 nights at Gate A, in a tent, never missing a single night of a single campout. Yet, somehow, it still flew by.

My sophomore season was highlighted by storming the field when we beat Ohio State in the Whiteout and a trip to Indy.

My junior season I was VP of Nittanyville (Thanks PJ for not letting me quit) under G-Wiz (@Gowisnock). I learned so much from you G-Wiz and the way you maturely handled things was a lesson I needed to learn from you. Thank you for being there for me even when I didn’t always treat you the way you deserved.

Thank you to Coach Moorhead (@BallCoachJoeMo) for showing up at my house and attempting to build a relationship with a kid that just loved Penn State football. Thank you for the love you showed Nittanyville and me during the 2017 season and thank you for staying in contact.

I was elected President of Nittanyville in April of 2018. I was determined to lead a headstrong effort to make everlasting changes to Gate A. I began having weekly meetings with Brad Keen in Penn State Marketing to begin planning for the fall. Those meetings continued all the way until this past week.

Nobody has helped me more in these past six months than Darian Somers (@StuffSomersSays). Since I was a freshman, you have been a mentor to me. You have brought me along on trips, given me endless advice and encouragement, and supported me through everything I have done. It is a scary thought, but I am not sure if I would even be in this organization if it wasn’t for you.

This season flew by and a lot of the ideas that the NCC had failed, but a lot of them also blossomed.

I am proud of the relationship we have built with the Blue Band and Director Greg Drane (@GregDrane). I am proud of the relationship we have cemented with PSU marketing like PJ Mullen (@psuPJ), Penn State OPP, Penn State Ticketing like Kode Plank, and Penn State Athletics like Sandy Barbour (@SandyB_PSUAD) and Cory Chapman. I am also proud of how we incorporated Penn State Sports Properties into our weekly campouts, especially PSECU and my boys: Jim Baker (@virvis) and Kyle Kissinger. Of course we wouldn’t have been able to do it without Campus Dining, who provided us with food every single Thursday of a campout.

I am thankful for the successful campouts, the Crashing of the Blue Band practice, the Dunk Contest (I should have still had a chance in the next round), the TCF Tournament, the Nittanyville’s Got Talent, the Cheese Club, the BBQ nights, the movie nights, the streaming of football games, the speeches, the drumlines, the trivia, DJ Rictor, the line dancing, and the thousands of other awesome events that have occurred at Nittanyville this year.

I am thankful to of the campers that I can’t mention all by name for all of the awesome memories we have shared together for the past four years.

I am also thankful for the campers before us, that paved the way for us to have such a successful season.

I would be an idiot and selfish if I didn’t thank my awesome group of officers for carrying this season on their back:

-Alyssa Samborsky (@AlyssaSamborsky), for taking my pretty darn good ideas and turning them into great ones. For putting up with my crap, and not taking anything personal. You are a soldier.

-Cam Panase (@Panase31), for doing the dirty work, turning Nittanyville into a PR machine, and for also putting up with me. I am excited for what you will bring to the organization as President next year.

-Mitch Hutula (@MitchellHutula), for being my biggest critic. When I was in a position where not a lot of people would tell me something was a bad idea, you always did and I needed someone like that.

-Bobo Longsnake (@mcfadder), for teaching me how to have innocent fun at Nittanyville with the endless pickup football games, to the trashcan football tournaments, to not taking everything so seriously.

-Patrick Bodnar, for literally doing everything and anything I asked. For also being innocent and fun. You make me wish I had another three years here just so I could campout with you. I am also excited what you will bring to this club in the future.

-Evan McNulty, for also being there and being dependable and doing anything I asked. For bringing positive energy and also for being innocently fun. Thanks for introducing me to Radiators.

-Tyler Turcheck (@tturch21), for your pup that you brought to Gate A and for your truck. Also thank you for being cool and down to help with whatever.

-James Notor (@JamesNotorboat), for teaching me how important pure, raw, passion is. For being the ultimate hype man, and for growing so much in a course of one season. I am proud of you.

A few more randoms I really need to thank:

To Coach Chaos, for letting Nittanyville be a part of the Wild Dog family. For having a personal relationship with me. I wasn’t even going to break down until you came over after the game. Thank you.

To the San Roman family, thank you for showing me the power of kindness and family.

To DJ Rictor (@iamdjrictor), thank you for showing me what really matters.

To Drew Yingling, for having me and my friends come by your tailgate and treating us as your own. You are seriously such an awesome person and even better friend.

To Mom & Dad, for supporting this incredible adventure that I have been on for the past four years. Not once did you try and convince me to not campout and I couldn’t be more lucky to have two parents who have always been there for me.

To Anthony, for being the supportive big brother who is always fast to brag about me. I’m glad to have made you proud.

To Gramps, for taking me to my first football game against Youngstown State a long time ago. In a way, if you didn’t take me to that game, maybe I never would have gotten hooked. Thank you for taking me all over the country to see Penn State football and spending a whole bunch of time with me.

To the Penn State football players, especially the ones that came out to Gate A to hangout extra, like MG (@mikegesicki), thank you for your support. It was one thing to campout at Gate A, but it was another for you to visit us and show your appreciation.

To all of the media members, who have interviewed me, recorded me, videotaped me, photographed me, thank you for adding bits and pieces to the memory bank. Thank you to Ben Jones (@Ben_Jones88) for always conversing with me on twitter and to Joe for taking candid pics of me (@JoeHermitt).

To Paddy (@PaddyCotter), for making a remarkable documentary of Nittanyville that I will be able to hold onto for the rest of my life.

Wow that was a lot of thanking, but it had to be done.

The best part about being President wasn’t the front row seats, the awkward weekly videos, or the drumline speeches. It was making small impressions on people. It was the tiny interactions, the hugs, the tears, and the laughs…man, a lot of laughs. Nittanyville will always be a special place because of the way it brings people together who would otherwise never hangout. It has always been home for me as I always considered everyone at Gate A my family and that’s what makes it so damn hard to say goodbye.

So to the large contingent of freshman who camped out this year, enjoy it. Because even though you just started hitting that cowbell, once it ends, you can’t pick the drumstick back up. You can only pass it to the next person and hope they play it with the same passion.