Moments of Brilliance, Mixed with Inconsistency: A Recap of the Penn State Defense through the First Half of the Season

Entering the bye week, it remains obvious that the Penn State defense has been the unit that most fans and analysts are most concerned about. Offensively, losing key starters was a concern, but playmakers have emerged already. Defensively, that just has not happened, yet, at least on a consistent basis. Let’s take a look at some bright spots and not so bright spots from the Penn State defense so far.

DB John Reid: Reid had his struggles early in the season as he was getting up to speed after missing 2017 due to injury. However, against Ohio State, he was fantastic in coverage and demonstrated the ability to tackle in open space. Going forward, I think this game will serve as a confidence booster for Reid as he looks to finish the season as a top corner in the Big Ten. 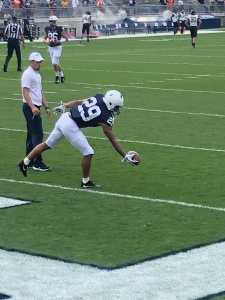 DT Kevin Givens: The absence of Givens week one against Appalachian State was glaring when the Nittany Lions struggled stopping the run up the middle and creating a pass rush. However, when he’s been in, he’s been using his speed as a way to get into the back field as well as come down the line and make plays towards the sideline. Being the best interior defensive lineman on a thin unit, Givens must stay healthy if the Lions want to win out.

LB Jan Johnson: Johnson has been the leading tackler so far for the Lions. The former walk on has 29 tackles so far this season. Although he is no Jason Cabinda, Johnson has provided leadership and a steadiness in the middle of the Nittany Lion defense that has been much needed with all the new faces playing on defense.

What we saw against Ohio State: This unit proved that when they are on, they are a top flight defense in the country. Outside of a late first half fumble in their own territory that resulted in a touchdown, the Penn State defense could not be stopped. They made Dwayne Haskins look confused, Ohio State receivers were obviously off schedule, and the running game could not get going at all. Even entering the second half, the defense took Ohio State’s opening punch, then continued to dominate throughout the second half as the offense got on track. It goes to show that with focus and playing with energy, this young unit can perform at a high level. However, when they don’t play that way or run out of gas, let’s look at what begins to happen to Brent Pry’s defense.

Tackling. The one fundamental that is practiced less and less because of new practice rules is the Achilles heel of the Nittany Lions. It was glaring week one when the defense couldn’t stop the Mountaineers. It popped up again week four when Illinois had a second half lead. And it was obvious to a national audience last week when Ohio State marched down the field twice in the fourth quarter as Penn State defenders failed to make tackles not just once, but multiple times per play. Gone are the days of almost guaranteed physical linebacker play and solid defensive line performances that have made the Nittany Lions a successful team throughout this century. Linebacker U will have to work on the fundamentals during the bye week to help clean up its glaring weakness of the team.

As proven by most of the game against Ohio State, this could be a top unit in the Big Ten. However, unless the tackling gets better the rest of the season, the Nittany Lions will suffer another set back or two. This team will go as far as the defense allows them. Here’s to hoping it can take them to a undefeated run the rest of the way.